Shelter considers the architectural legacy of the Nissen Hut (the curved structure invented during the First World War to house soldiers and supplies) and the material and conceptual relationships between this structure and contemporary modes of ’emergency architecture’ that respond to the precarious and humanitarian crisis of the ‘mass movement of peoples’ in Europe today. Constructed live over seven days on the parade ground and galleries sited in a the former Ebrington army barracks in Derry-Londonderry, Shelter was made with advice from the architect Grainne Hassett, founder of Calais Builds, during the initial phase of the project and assisted by a team of local activist helpers. 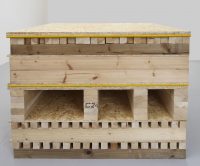 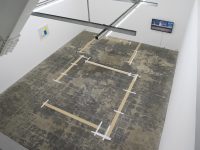