The footage of workers filmed within the financial district of the City of London, such as cleaners, painters and construction workers has been decelerated in this work to draw attention to the minutiae of different ‘work’ activities, transforming the ordinary into the extraordinary. The beginnings of Drift came as Tallentire began to recalibrate her relationship to live performance, looking at the actions of others instead of her own. In Drift she considers the potential of gesture as an embodiment of agency, specifically in relation to the figure of the worker in public space. Drift, a series of 23 video works filmed at various times of night and day, investigates how the often overlooked and mundane activities of urban experience are negotiated within a continually shifting demographic determined by economic and social forces. Each installation is devised specifically for the demands of the space provided and is identified as a numerical ‘diagram’ in order to emphasise the necessity for critical consideration of context. Drift exploits the peripatetic potential of digital video in order to explore the significance of specific actions to extend an investigation into ‘working practices’ seen on and from the street. Through this process, using a fixed frame and slow motion, various activities are recorded to test how the mundane is read according to specific situations and various states of perception.

Drift: diagram vii was the first of four solo installations that staged all (original) 21 videos, over two spaces, as a six-screen installation in a solo exhibition at The Void Gallery, Derry (2005).

Drift: diagram xiii (2012) staged 23 videos works (including two new works) installation, SD video, monitors, media players, scaffold structure. Exhibited as part of a solo show at Hollybush Gardens, Drift: diagram xiii examines the physicality of labour at the centre of England’s fiscal capital, where the products of human toil register simultaneously as visible and invisible, additionally abstracted into numerical expressions of ownership represented by the machinations of the financial sector. The agency of those portrayed is thrown into relief by the modernity of what geographers would call a time-space locale within the city. A site is constructed here that reveals bodily comportment and gait bringing us to think about how we might occupy space differently depending on our subject position.

Drift: diagram xvii at DMA Dallas (2017) staged all 23 works in a specially designed scaffolding structure built for the space.

Other ‘diagrams’ have presented single works and groups of works exhibited in various group shows. 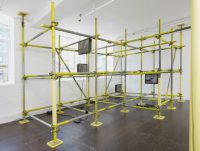