‘Setting out’ in the building trade refers to the act of measuring and marking out a full size plan of a building on site. Tallentire has used simple materials to sketch out the perimeter of a selected space from another important building in Graz, that of Terrassenhaussiedlung, St. Peter. Completed by architects Werkgruppe Graz in 1978, the housing complex has long been recognised as an important architectural project in the history of social or shared housing, and is currently the subject of SONTE, a future oriented architectural research project. A utopian initiative, the building is known for its common areas that appear between each level and are shared by a number of inhabitants from each floor. For Tallentire, these spaces represent the lived reality of common space, in their provisionality, their range of use and their varying degrees of occupation, persistence or neglect. Standardised dimensions and the regulations that govern spaces of living have long influenced Tallentire’s practice and process as an artist. Her abstraction and distillation of this information, transcribed into a simple line that runs the perimeter of the gallery and matches the exact perimeter of the common area, brings the footprint of one space, with all its complexities, histories and unknown potentials, into that of another. 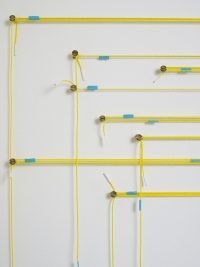 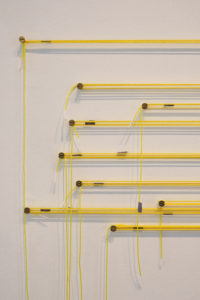