Instances III depicts a single action of an ear pressed against a city wall. The only movement in the 11 second looped sequence is an almost imperceptible fluttering of hair. Instances III belongs to a long standing practice of Tallentire’s performances for video made in the city: Do you know this place (1990), Inscribe I (1994), Inscribe II (1995), Trailer (1998) and Instances (1999). Initially made for and included in Trailer by work seth-tallentire with camera-work by John Seth, Instances III formed the central part of the Instances trilogy when Tallentire was sole representative for Ireland at Venice Biennale. 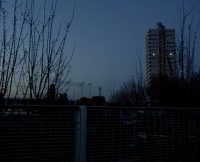